In the last two weeks I played in the very strong Karpos Open, which was held in Skopje, Macedonia.
I scored 9/5,5 points, winning some rating points and gaining a lot of experiences.

During the tournament I stayed in a Trubarevo (9km from Skopje) with my good friends FM Tésik Csaba and Péczely Sebastian Zsombor. The tournament hall was in 5* Hotel Aleksandar Palace, so the conditions were optimal. Even every player could get free drinks during the rounds!
The first round has been played in March 9, followed by a double round in March 10, and the last round was played in March 16. Usually the rounds started at 17.30(!), except the morning round (Round 2 and 9) which started at 9.30.

The tournament hall before the 1st round 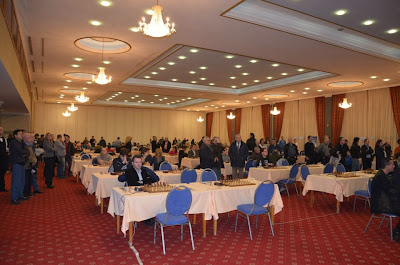 A "short" summary about my games:

Round 1, Csonka Balázs (FM,2319) - Onal Ozan (1461): Finally, I won a game in the King's Indian Bayonet with white! We followed a long theoretical line, up to one point where my opponent deviated, and I managed to exchange his light squared bishop, achieving a slight edge. But then, he made a decisive mistake: 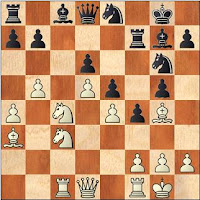 In this position (instead of changing bishop on g4) he played 18...Bf8?, allowing 19.Be6 and after changing the bishops, my knight reached the d5 square, with a huge advantage for me. After some inaccuracies from both sides I converted the advantage to a full point.

Round 2, Saric Ante (GM, 2549) - Csonka Balázs: As this game was played in the morning, I was tired and unprepared for the game, so I tried to surprise my opponent with something new. In the symmetrical English (first time I've ever played) my opponent played a tricky, pawn sacrifice line which I did not know before the game. I declined winning material instead I focused on my development and equalised comfortably. Unfortunately, I got into time trouble and started to play wrong moves, although my position was still playable. But then I made a terrible blunder: 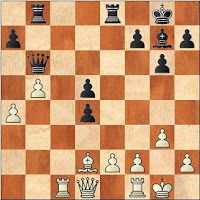 In this position, I played 22...a6?? and when my opponent answered with 23.Rc6 I was completely shocked. The rest was easy for a grandmaster.

Round 3, Csonka Balázs - Velikic Adela (1990): As this was a "double-day", I did not have enough time to prepare for the game, and when I saw my opponent playing the Semi-Slav, I decided to try 5.g3 without too much knowledge. An interesting line, slightly reminding for the Catalan, but with an extra Nc3,c6 moves. My opponent played a passive line, so I could transpose to a favourable version of the Catalan. My bishop pair was very strong and black could not find any active plan. Finally, black collapsed. 1-0


R4, Malakhatko Vadim (GM, 2572) - Cs.B.:  My opponent played the London System, which I have used successfully some years ago. But this time, I was behind the black pieces. In the middlegame I found an interesting regrouping, playing for the central break. White could avoiding this, but only with some piece exchange. I think I got a reasonable position, with a counterplay on the queenside. Of course, my opponent should have do something, and he tried to spice up things with h4-h5 attack! My attack on the queenside was faster, but of course his attack was more dangrous, as my king was in the kingside. In a time trouble I sacrificed an exchange for a pawn, and I got a very strong compensation. But now, my opponent started to play like a computer! He found all the best moves in time trouble, but I could not. In the end, his attack was deadly, and I lose a piece. 1-0


R5, Cs.B. - Péczely Sebastian Zsombor: What a bad luck! Travelling more than 700km and facing a countrymate... Our preparation was quite hard, as we know the opening repertoire of each other quite well. So I decided to try the 5.g3 Semi-Slav (again) instead of entering to the main lines. For my pleasant surprise, Zsombor did not know my game from the 3rd round, and played a same line as Velikic did. The first deviation was in the 14th move, but it should not change the evaluation of the line. But strangely, I could not find the best way, and my opponent got a lot of counterplay. My opponent offered a draw somewhere, but of course I wanted to play on, even with a little time on the clock. I sacrificed a pawn for the bishop pair, but "Zsizsi" (his nickname) found the best plan, regrouping his pieces, and activating his bishops. At the end, I could not find better than move repetition. 1/2


R6, Bejatovic Bojana (2011) - Cs.B.: This time I chose the King's Indian with black. My opponent (who is a member of the Macedonian women team) played the solid fianchetto line with d3. The position was closed, my opponent played on the queenside and I tried to find the best places for my pieces. I should have do something, but how to crack such a stable position?!? Well, I remembered what Malakhatko did and a tried the same idea: h5-h4! Suddenly, my attack became obvious, and she had to transpose to a worse endgame. I had a bad pawn structure (c6,c5,e6,e5) but I had a very strong knight on d4. In additional her light squared bishop was very stupid, because her pawns (c4,d3,e4) completely blocked it. With 4 rooks still on the board I tried to change 2 of them, weaking her defence. I managed to do this, and my knight dominated over the board. Finally, her bishop has been trapped. 0-1

R7, Cs.B. - Indjic Aleksandar (IM, 2502): As it was predictable, my opponent played the Benoni. I reacted with a fashionable line, but he was well prepared against it and played a tricky variation, which I did not really know before the game. We played normal moves and got a fighting position. After manouvering on both wings, we got the following position: 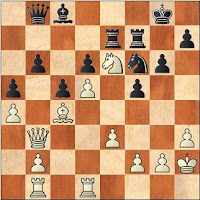 
R8, Damljanovic Branko (GM, 2562) - Cs.B.: Another grandmaster, again with black... This time a faced the Trompowsky. I played my usual line, and my opponent played the main line. Unfortunately, I mixed up the move order and white could play Nh3-Nf2 which is usually good for him. My position was very passive, and I could not do anything, only waiting. I managed to survive the middlegame and I had to defend the following endgame: 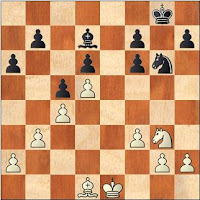 First I felt that it should lose, but after finding a good defensive plan 31...f5!? (not allowing Bc2-Bf5) 32.Bc2,Nh4! (important time gaining move) I built up an unbreakable defence. My opponent of course tried hard, but he could not break through and the game ended in a draw in the 60th move.


R9, Cs.B. - Atanasov Radislav (2147): As this game was played in the morning I could not prepare too much, so I decided to play usual lines which I know. Again I faced the Benoni, and again I played the same line as I did against Indjic. But this time my opponent played a weaker line, allowing to regrouping my pieces. I achieved a huge positional advantage, which I first converted to a pawn and later to a full point.

The tournament was won by Kozul with 9/7 points, followed by M. Rodshtein, Lupulescu, Iturrizaga, Perunovic, Ivanisevic, Stevic and Hamitevici, also with 7 points. 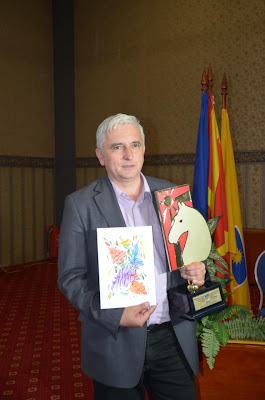 Important win in the Team Championship


Last weekend, my team made a big step for the 4th place in the championship. We are one point ahead of Pénzügyőr and three points ahead of MLTC before the last round.

P.S.: I have to say a big thanks to Michael Yip who helped me a lot to publish my game with Flash Player!
Posted by Unknown at 15:41 1 comment:

Today I played my first tournament in 2013. I won the II. Móra Kupa rapid tournament, with 7/6,5 points, one point ahead of the second. 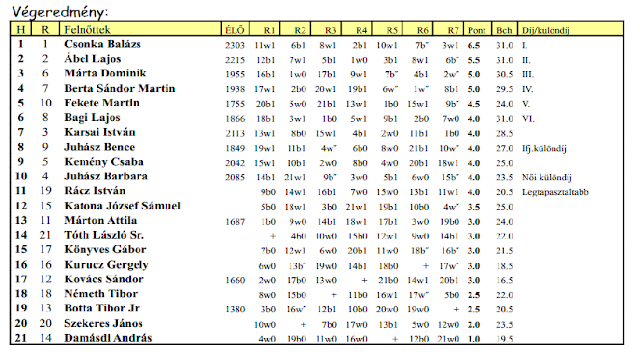 A short summary about my games:

Csonka Balázs - Márton Attila 1-0: In a Volga-Benko gambit, I held my extra pawn, and converted into win. 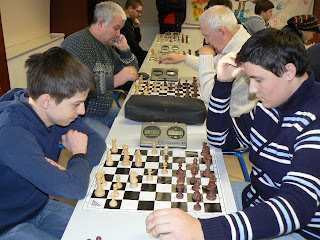 Márta Dominik - Csonka Balázs 0-1: My opponent played a rare line, but I managed to equalize without any problem. In the middlegame, he made a slight mistake, so I could eliminate his dark-squared bishop. Later, with a small tactical trick, I scored the full point.

Csonka Balázs - Bagi Lajos 1-0: The classical QGD with 4...Be7 has arisen. Somewhere I made a mistake because my opponent could advance his pawns on the queenside. Later on, in an equal position, he played g7-g5??, opening his king's position, which was an obvious mistake. Some moves later, black's position collapsed.

Ábel Lajos - Cs.B. 0-1: In a London System (d4,Nf3,Bf4), I could change his black-squared bishop with Nh5, so his centre was more vulnerable. Also, the knight on h4 was out ot play. All in all, it was too much for white, and in a time-trouble, I outplayed him, and won.

Cs.B. - Fekete Martin 1-0: In a "boring" Slav, I seized the initiative, and got a "good knight vs. bad bishop" ending. After some inaccuracies from both sides, I won.

Berta Sándor - Cs.B. 1/2-1/2: My opponent played a tricky line in the Caro-Kann, and I couldn't remember all the details. I got a worse position, but with a long struggling, I held. 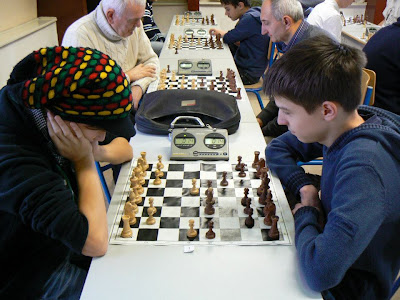 Cs.B. - Karsai István 1-0: Black played a dubious move order in the opening, and I could put my knight on d6. Of course it was very dangerous for Black, so he sacrified a pawn to get some counterplay. I successfully defended the position, and converted my material plus to win. 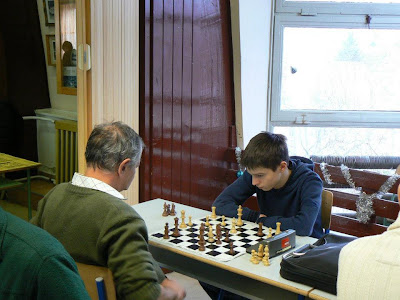 Some other picture from the tournament: 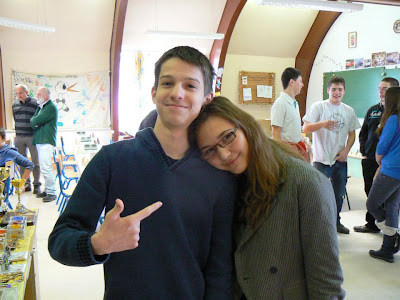 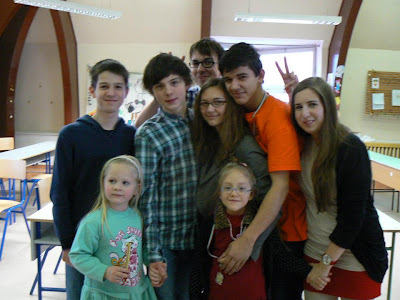